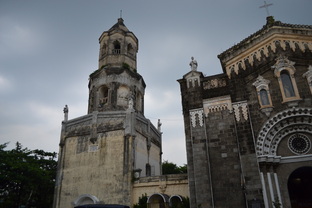 The Church was originally founded by Augustinians as chapel of Tondo, 1575. The Parochial Church and Convent was built under the patronage of Nuestra Señora Dela Asuncion, 1578. During 1762 the Americans occupied and burned the church. It was later reconstructed on 1812. On the year 1877, the construction of the Bell Tower was initiated. The church took heavy damage from earthquakes during 1863, 1869 and 1880. The Church then was remodelled in the design of Neo-Byzantine, 1884-1885. The construction of the bell tower was finished by the year 1889. It is here where Gregorio H. Del Pilar secretly distributed all the “Polyeto” or pamphlets written by his father, Marcelo H. Del Pilar during the campaign against the Spaniards. The final appearance of the Church was formed, 1955 – 1975.