Originally known as Encomienda Caluya as per as the history records regarding the early years of Bulacan Province, Caluya was mentioned as one of the Six Encomiendas of the Province together with Calumpit 1572, Bulakan 1578, Meycauayan 1578, Malolos 1580 and Binto 1591 (Quingua 1602) later known as Plaridel. It was erected by the Augustinian Missionaries in 1592 under the jurisdiction of the Alcalde Mayor of Bulacan. In 1602, Caluya was formally organized into a town with its own Gobernadorcillo and renamed to Bigaa.

During the Philippine revolution the "insurrectos" and the "Guardia civiles". Many people died, further decimating the town, which has suffered from a cholera epidemic and nearly wiped out the population 20 years before. When the Americans established civil government in 1902, Bigaa and nearby Bocaue were combined to form a town with the latter as the seat government. In 1911, however, Bigaa was separated from Bocaue, and to it was added the town of Pandi, which became one of Bigaa's barrios. In 1946, shortly after the Philippines gained political freedom from the United States, Pandi by virtue of a legislative fiat was given a municipal charter of its own, distinct and apart from Bigaa. 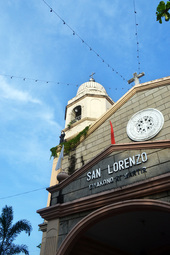 Also known as San Lorenzo Ruiz Parish Church is located at Brgy. Longos on the rear side of the Balagtas Municipal Hall.